The Museum sits in the Tsz Shan Monastery which he also helped build. The monastery and the museum were both sponsored by the Li Ka-Shing Foundation, a brainchild that stemmed from Li Ka-Shing’s philanthropic aspirations, founded in 1980, which supports education and medical projects in 27 countries worldwide.

Tsz Shan Monastery and its newly established Buddhist Art Museum, which cost around US$382 million, serve as a Center for Buddhist research and studies for those who seek transcendence and spiritual realisations through Buddha’s teachings of Clarity, Compassion and Action.

Alongside the large Guan Yin statue and art museum, the monastery features a Ksitigarbha Bodhisattva Hall, a Bell Tower, a Drum Tower, and a Library of Buddhist Texts. Symbolizing rebirth in the Pure Land, a pond with water lilies and lotuses are also present by the courtyard.

The inaugural event was graced by the presence of Li Ka-Shing himself, the richest man in Hong Kong, whose wealth Forbes estimates at US$33.4Bn. In his speech, Li quoted the Diamond Sutra, “All phenomena are like a dream, an illusion, a bubble, a phantom,” he said. “For me, Buddhist philosophy has guided me through apprehensions, fears and vicissitudes.”

“Who am I? What should I do with my life? How do I create the good future? And the bold and hard question: in what direction should we move forward and thrive together?” said Li. “I hope Tsz Shan Monastery can be a space for such quiet contemplation and orientations.”

The museum’s stunning and everlasting relic collection is aimed at transcending the story of Buddhism and the reasons for its survival through history. Its vast collection includes 100 Buddha statues from across Buddhism’s historical and geographical development, along with 43 hand-copied Dunhuang sutras.

A majority of the statues were donated by Li himself, while others were acquired directly by the Li Ka-Shing Foundation from mainland China, India, Japan, Myanmar, and other East and Southeast Asian countries.

Li Ka-Shing’s inspiration to construct the Art Museum stemmed from his aspiration of promulgating Buddha’s teachings to the world. True to his belief that Buddhism is a philosophy meant for everyone, most of Li Ka-Shing’s donations to the Museum feature the beautiful transcendent smile of the Buddha, although the story of human dedication and suffering is underlain behind it. The Museum aims to exemplify and convey the life and teachings of the Buddha through its collection.
Tsz Shan Monastery can be visited by appointment only, with an allocation of 400 visitors on a daily basis. The museum has been declared as free of charge to visitors from the 1st of May. 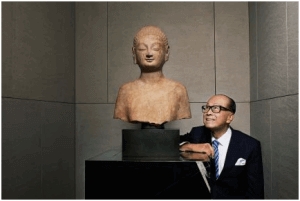